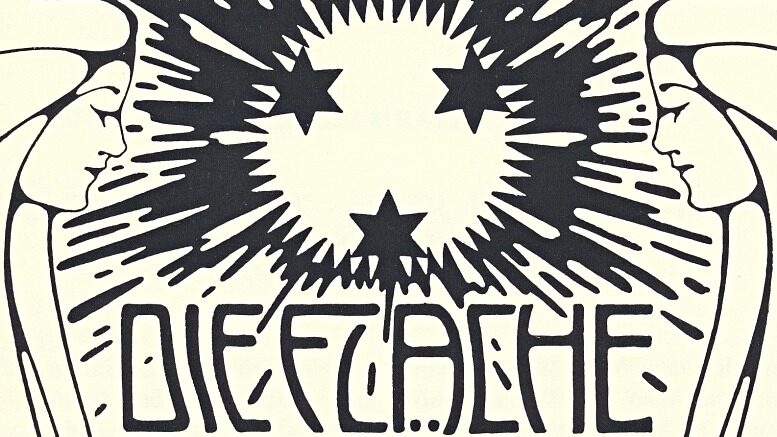 “It is the nature of a poster to confront people in the midst of comings and goings, captivating even the most indifferent, and give each person, also those who are reluctant, an unforgettable experience to take away with them,” Joseph August Lux stated in his article on “The Modern Poster” in the design publication “Die Fläche”.[1] This compendium of 12 issues with 16 pages each, which grew into a “pattern book” between 1902 and 1904, was edited by the Director of the Wiener Kunstgewerbeschule (Vienna School of Arts and Crafts) Felician von Myrbach together with the professors Josef Hoffmann, Koloman Moser and Alfred Roller. In 1910/1911 Bertold Löffler subsequently published another two issues in a “new series”.[2] The designs in these issues exclusively showed various forms of applied graphics. With just a few exceptions, the professors presented works by their students at the Kunstgewerbeschule and thus demonstrated elements that corresponded to their idea of the “Viennese style”. Accordingly, Werner J. Schweiger commented on the compendium as follows: “Despite the diversity of the presented material, which was created by almost a hundred different artists (or rather Kunstgewerbeschule students), one should probably speak of a kind of ‘collective style’ and not about manifestations of independent personalities.”[3] 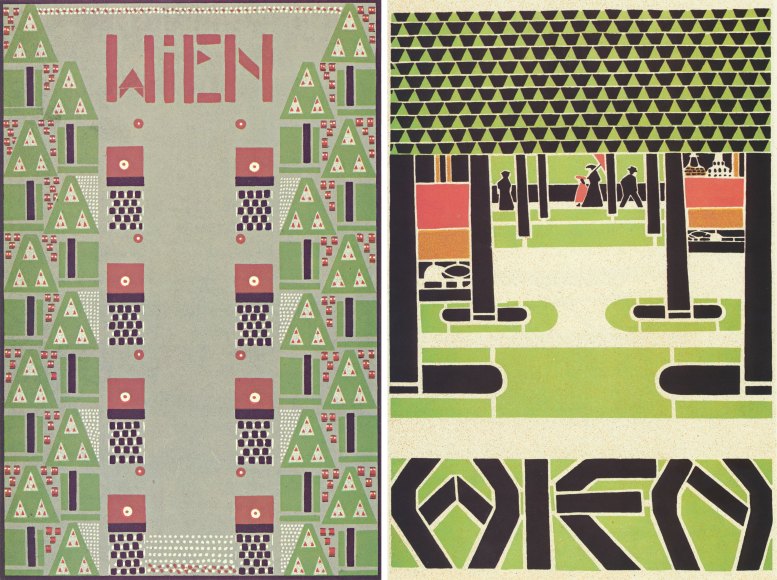 The name of the project, “Die Fläche”, was also a description of its content: consciously avoiding any illusion of three-dimensionality, innumerable examples of two-dimensional graphic design from various areas of use were introduced, ranging from posters and books to endpapers, from menus and business cards to textile designs.

Among the many pictures, “Die Fläche” includes a six-part series of posters for Vienna[4] that were striking not just owing to their modern approach, but also due to the idea of producing poster advertising for a city. In the early 20th century, this was still unusual anywhere in the world. Even so, these designs never actually became posters. The works were by Josef Bruckmüller, Hilde Exner, Moriz Jung, Reinhold Klaus, Anton Kling and Emma Schlangenhausen. The quality of these published designs is no accident – after their comprehensive training at the Kunstgewerbeschule, all these artists enjoyed prosperous careers. 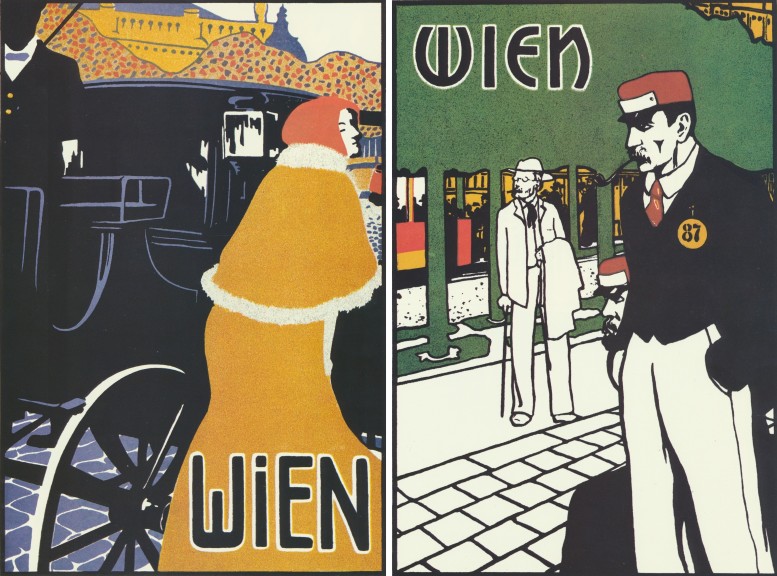 Emma Schlangenhausen (1882–1947) successfully built an extensive graphics portfolio, but also created frescos after she later moved to Salzburg. Her friend Hilde Exner (1880–1922) soon focused on sculpture and completed further studies with Aristide Maillol in Paris and also in Rome. After working as a nurse during the First World War, she died in 1922 from the delayed effects of an infection contracted during that time. Salzburg’s first major sculpture by a female artist to be displayed in the public domain – the figure of David on the war memorial in Morzg Cemetery – was designed by Hilde Exner. Moriz Jung (1885–1915) was also a war victim, but was able to create interesting works despite his short life. He worked as an illustrator of books and magazines, and his designs included a poster and a programme for the “Cabaret Fledermaus”. Besides this, he drew no less than 63 postcards for the “Wiener Werkstätte”[5], and also designed sheets of pictures and illustrations for the 1911 almanac of the “Wiener Werkstätte”. The oeuvre of the versatile artist Anton Kling (1881–1963) ranges from book art to jewellery and ceramics. In 1908 he became a professor at the Hamburg Kunstgewerbeschule, from 1923 to 1927 he was Director of the Kunstgewerbeschule in Pforzheim, after which he lectured in Karlsruhe. Reinhold Klaus (1881–1963) specialised above all in designs for stained glass and mosaics following his training. After graduating from the Kunstgewerbeschule, he studied at the Akademie der bildenden Künste  (Academy of Fine Arts) in Vienna. For decades he had a formative influence on the work of renowned stained glassmakers “Carl Geyling’s Erben” in Vienna as their art director. Like Anton Kling, Josef Bruckmüller (1880–1932) also had a successful career in Germany. Specifically, from 1908 to 1919 he organised a drawing class especially for women at the Kunstgewerbeschule in Dusseldorf.

The Poster and Art