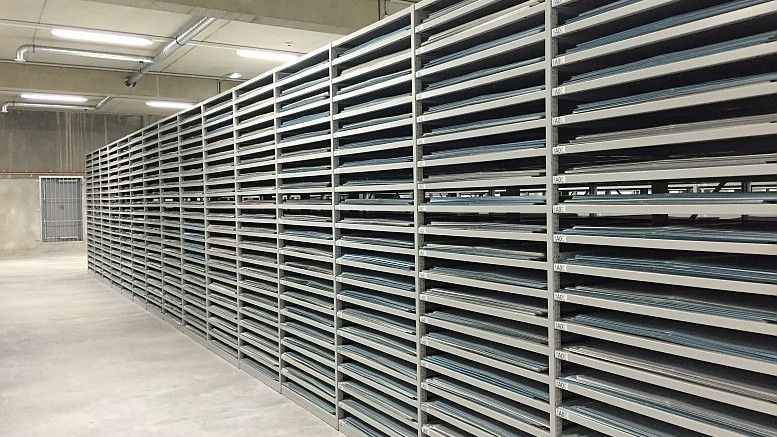 Storage facilities of the Poster Collection of the Vienna City Library

After the Austrian National Library and the University Library, the Vienna City Library is the third largest academic library in Vienna. The focus of its collecting activity is on the history and cultural history of Vienna – in a broader sense of Austria, or respectively the Austro- Hungarian Monarchy. In addition to the collection of printed works, there is a significant collection of handwritten works, a world-renowned music collection and, as a further important special collection, the poster collection.

The year 1923 witnessed an important event in the history of the Vienna City Library. On 27th June, Hugo Breitner, who was then the Executive City Councillor for Finance of Vienna, sent a memo to “the Director of City Collections” requesting information “as to whether Vienna has any institution which possesses a planned poster collection and which continues to maintain this on a regular basis”. With great vision, the culturally very aware councillor recognized, as no-one else at this time, the significance of such a collection for posterity in the various spheres of social life. The maxims set out in this memo, which laid the foundation for the collection of posters in Vienna right up the present day, provide a guide for this collection activity which is still valid today. Following the question as to whether such a collection already existed, the memo continues: „If this is not the case, then I believe that the Vienna City Collection could take an interest in this area within some framework as yet to be outlined, as there is no doubt that political, economic and cultural relationships – and as regards contemporary illustrated posters, to some extent also artistic relationships – are reflected in the posters. In view of the virtual monopoly of the council in poster announcements, it would seem that the acquisition of material should not present any difficulties.”

Breitner stated in precise and succinct terms how immensely important a poster collection was for the documentation of the cultural, political and economic development of a city or a country. The Board of the City Collections (consisting of the Library and Historical Museums of the City of Vienna, now “Wienbibliothek” and “Wienmuseum”) had also recognized the importance of this and had therefore, even though to only a limited extent, collected political and artistic posters, particularly ones that could be indentified with the then modern concept of large advertising posters. The earliest posters which, because of their small size, were also regarded as handbills, include announcements of forthcoming events. Artists, tightrope walkers, trick-riders, show people, pyrotechnic display artists, the management of the “Hetztheater” and other groups used this kind of publicity to promote their performances. These small posters had always been collected by the Vienna City Library, as had the political posters of the revolutionary year 1848, and the number and complexity of this collection is virtually unmatched by any other collection.

Now that the official directive had been issued to create a collection, the existing collection could be – and had to be – extended. The Board therefore decided that the posters affixed by the bill-posting company “Gewista”, which serviced, and continues to service the majority public hoardings in Vienna, would be collected at certain intervals, und those coming into consideration as works of art should be passed on to the Vienna City Museum. From the very outset, then, posters were not collected according to artistic criteria, but were intended to document history and cultural history in every aspect, just as they appeared on public hoardings or building walls. As representatives of the culture and history of our society, the posters have immense importance. Maintaining this representation as a historical and cultural-historical source is of the utmost importance, and the official instruction to intensify collecting activity enabled those responsible to widen the implementation of something they had no doubt long intended, to devote time and effort to this area of publishing art and to establish collections.

The next step was to conceive of ways in which this collection, rudimentary elements of which already existed, should be structured. In order to avoid duplication of collections, the artistic posters could be transferred from the City Library to the Museum. The painstaking distinction of “artistically valuable” and “everyday” posters was one which had to be made in order to be able to divide up the posters between the Library and the Museum which together made up the City Collections. This distinction was never a criterion for the selection of items to be collected, and it is indeed a very difficult one of the implement. Retrospectively it can be said that the distinction between “works of art to be considered for the Museum“ and “normal” posters, destined to remain in the Library, was very problematic. We have always tried to determine the socio-political impact and presentation of the posters, whether they were designed by well-known artists or were anonymous. This approach was always the basis of our policy, especially after the division of the City Collections between the Library and the Historical Museum – in the course of which the so-called artistic posters remained in the Museum.

It has always been easier to make a retrospective judgement as to whether an object had any artistic value than to do so at the time of its publication, especially when it is considered that many secession posters were prohibited at the time in their original form. Precisely these originals now count amongst the most valuable items in the possession of the Vienna Museum. The original intention of separating the posters into text-only and illustrated posters apparently never came to fruition, as this would have meant a duplication of each group, and this would not have been practical. In order to build up as wide-ranging a collection as possible, almost at the same time the proposal for a systemization of the collection was put forward, a letter was sent to the bill-posting company „Gewista”, asking them to „provide copies for the City Collections of all posters with any reference to Vienna and the following areas: 1.) All electoral posters (illustrated and text-only posters), 2.) Purely artistic illustrated posters, 3.) Posters showing views of Viennese buildings, parks, squares etc., 4.) Posters of exhibitions (allotment exhibition, art associations, the Vienna Trade Fair).”

Since there is a visible jump in the growth of the poster collection from 1930 onwards, it would seem that very few items were discarded by the Library. Since at the time of publication of a poster it is virtually impossible to establish a value scale, it is much more likely that virtually all incoming posters were archived. This unique procedural method of not evaluating and sorting incoming stock is, as far as we know, not used by any other poster collection in an Austrian library. Today, no such distinction is made. On the contrary, posters are taken in not only from “Gewista” but also as far as possible from other bill-posting companies, from cultural and political groups as well as posters directly collected from or sent by companies in the knowledge that this activity helps document the political, social and cultural historical situation of an epoche, but especially of everyday life. We are also fortunate in repeatedly acquiring posters as legacies from estates of the deceased or from released firm archives. Currently, the major groups of the Posters Collection of the Vienna City Library are: political posters since World War I – the posters from 1848 have, for administrative reasons, been assimilated into the collection of printed works – posters from exhibitions from approximately 1924 (posters of this classification from earlier periods are now in the Museum of the City of Vienna), announcements of events of all kinds, such as dance events, days of animal protection and brass band festivals. Important groups here are the innumerable Viennese theatres and entertainment locales, from the „Apollo” to the „Ronacherbühne”, which served theatre, cabaret and other branches of small-scale entertainment. A further specialized area includes the approximately 9,000 film posters, but the areas of tourism, sport, money and finance, adult education etc. also continue to be collected as comprehensively as possible.

So posters do not simply serve as objets d’art to be treated like a precious (and expensive) original painting, but are regarded as consumables which give uncommonly lucid and valuable insights into history and cultural history. This attitude means that as far the Vienna City Library is concerned, al the posters in its collection are equally valuable whether they are the work of an acknowledged artist or are the anonymous promotion of an new shoe polish. All items are carefully and painstakingly archived and preserved as well as possible for posterity. The premature mounting of a poster on linen or Japan paper, frequently irrespective of the condition of the poster, is not undertaken. Only essential restoration work required for the complete restitution of the item is undertaken, since experience has taught us that every interference with the paper substance, no matter how delicate this may be according the most advanced state of technology, has some influence, even if this is not calculable at the present time, and can never be reversed without trace when new information becomes available.

Again and again members of the Vienna City Library are asked why posters of these various areas are collected at all. Over the past years the prediction made at the time has proved to be true. The wide variety of political posters, announcements from the area of product promotion, culture, entertainment, sport, tourism through to demonstrations gives us enormous insight into the history of Vienna.

The rule of thumb for our collecting activity is “collecting everything which ever was or is bill-posted in Vienna”. In fact, this guideline is always received with understanding, as the Vienna City Library takes on the archiving function. Many companies have no archive and, when the occasion arises, are happy to have recourse to the stocks of the Library. The Vienna City Library is happy to be constantly involved in various projects, both at home and abroad, as the unique quality of the stocks here offers viewing and illustration material for all purposes in a way that is virtually unparalleled by any other major collection.

Revised version of: Barth, Gerda: The Poster Collection of the Vienna City and Regional Library, in: PlakatJournal 1994/2, p. 3ff.

No Two Values are the Same: Some thoughts on valuations and assessments of posters