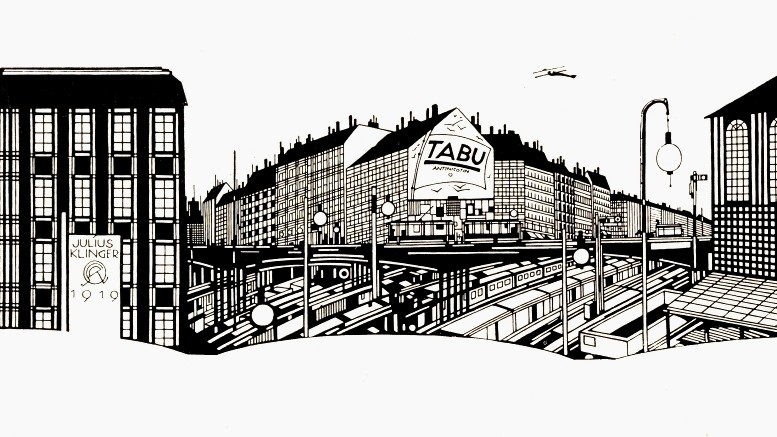 Julius Klinger was among the most influential artists of the German poster era before World War I and he became one of the most important innovators of Austrian poster art after 1916. Within the field of tension between the antipodes Lucian Bernhard and Ludwig Hohlwein, he found an artistic language that, while leaning toward Bernhard, had its own individual power. Formally, it was based both on graphic clarity and a sometimes radical economical use of the artistic means which today is still considered modern. Reference is often made to the typical Klinger joke: Klinger had the ability to fascinate both the man on the street as well as the gourmet in the same way. His humor was kind and ironic, without sentimentality, and accurate, without being coarse. Inspired likewise by the fashion drawing as well as the caricature, Klinger mastered both the fine, elegant line and the caricaturing overdrawing. Oftentimes, his humor was connected to his interest in fashion, his alert look at clothing, his attention for gracious movements, his love for modish draperies. Max Osborn mentioned Klinger’s origin “from the fashion business”1 and referred to Klinger’s mother, who allegedly was a well-known Vienna clothing artist. Klinger’s sense of rhythm and sound determined the elegance of his compositions, the noblesse of his colors. His mastery of the clavier of fine, broken tones and of the lapidary purity of shrill, bright colors remains unparalleled with a matter-of-factness. 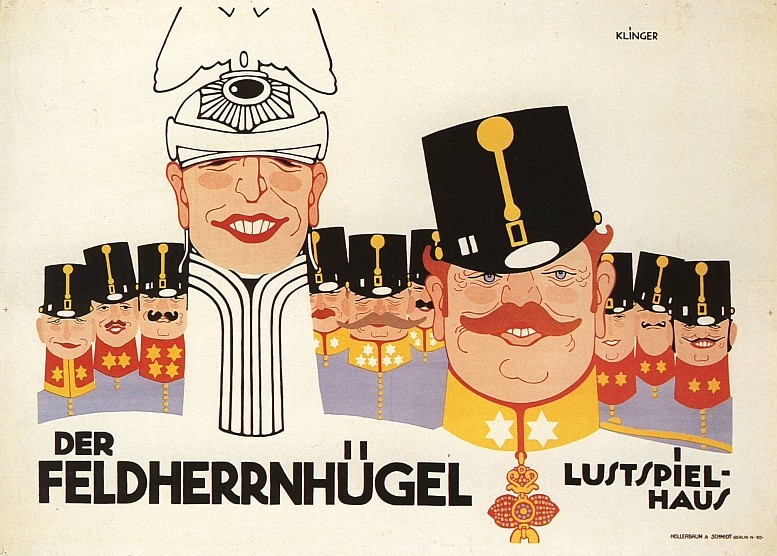 Julius Klinger was born on May 22, 1876 as the son of the merchant Josef Klinger and his wife Luise, born Blan. After completing the primary and secondary schools, he attended the Lower Vocational School for Structural- and Machine Engineering at the Institute of Technology and Industry in Vienna from the winter semester of 1892 to the summer semester of 1894. He studied mathematics and calculus, structural engineering, and technical and commercial drawing. After completing his studies, he worked as a volunteer for “Wiener Graphische Industrie”, drawing for the “Wiener Mode”. During this time, he met Koloman Moser, whose support and mediation took him to Munich in 1896, where he worked as a draftsman for the periodical “Jugend” and the “Meggendorfer Blätter”. One year later, in 1897, he – like many other Viennese – was drawn to the more open Berlin. Together with Albert Knab, he opened a studio there. They offered their clients “original designs for the graphic arts and for all areas of the art trade”.2 In 1901 and 1902, Klinger published his book of patterns “Das Weib im modernen Ornament” and “Die Grotesklinie und ihre Spiegelvariationen im modernen Ornament und in der Dekorationsmalerei” which reveal his view of the Jugendstil-oriented works at the time. On the other hand, he regarded the works by Audrey Beardsley as exemplary. In 1898 and 1899, Klinger worked for the “Narrenschiff” which had published only 13 issues; in 1902, he started to draw for the periodical “Bühne und Brettl”; in 1904, he worked for Gustav Meyrink’s magazine “Der liebe Augustin”. Works for the “Lustige Woche”, published by Lothar Meggendorfer, followed. The majority of illustrations for the “Lustige Blätter” were created between 1897 and 1906. They are striking as a result of their punch line imagery. As a result of his consistent devotion to the plain dignity and uprightness of the graphic surface, Klinger was predestined to create posters – which he began in 1897. It was probably Ernst Growald, director of the modern print department and partner at the printer Hollerbaum and Schmidt, who discovered Klinger’s talent. Filled with the missionary idea of establishing a home for artistic advertising in Germany, he was looking for qualified draftsmen who were able to raise the quality of the poster art. Klinger had been working for Hollerbaum and Schmidt since 1898. One year earlier, he designed his first poster for “Das kleine Witzblatt”. It still showed signs of detailed drawing, though his effort to produce generous forms was already pronounced. 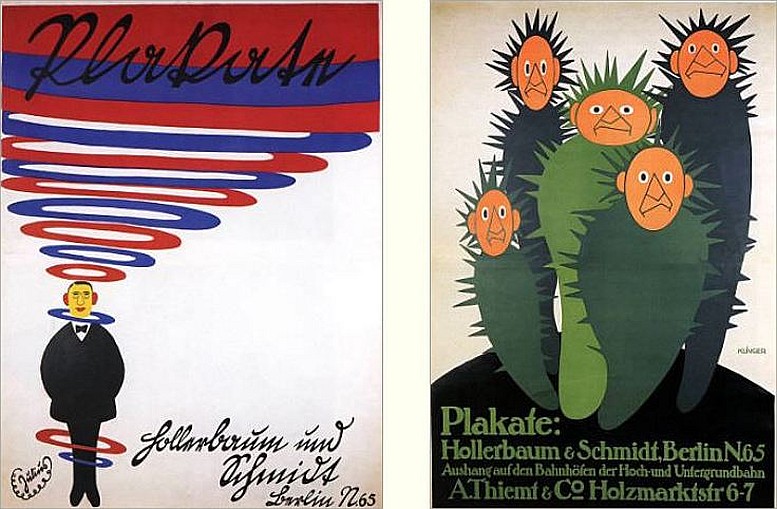 In the following period, Klinger quickly developed his own distinct poster style which he improved to virtuosity. Increasingly, the work on posters replaced the work of the illustrator. After 1905, with the printer’s growing success, Klinger joined the team of artists – Lucian Bernhard, Julius Gipkens, Paul Scheurich and Ernst Deutsch – that maintained permanent contracts with the printer. Klinger’s works quickly gained in popularity. In 1910, he was one of the best known poster artists whose professional competence was more and more in demand. On September 1, 1910, he began to teach at the newly established “Higher Technical School for Decorative Arts”. In 1911, he directed the expert class on poster art at the private Reimann-School. When the two schools were joined on January 1, 1912 and Else Oppler-Legband departed from her position as director of the “Higher Technical School for Decorative Arts”, Klinger became the director of decorative classes. Until he was drafted by the Austrian military in May 1915, Klinger remained as a teacher at both art schools. In addition, starting in 1907, he participated in discussions, gave speeches and wrote articles as a theoretician.3 He himself summarized his ideas in a critical essay in 1924 (published in 1925) titled “Das Chaos der Künste”. He particularly polemized against a transfiguration of advertising as “high” art and the dilution of advertising, serving only the consignee, through a comprehensive illustrative style that has a moral-ideological claim. In the same way, he rejected the ornament for its own sake.

His departure from Berlin was to be permanent. After the war, between 1919 and 1921, Klinger, whose good reputation had hurried on to Vienna ahead of him, created numerous posters and advertisements for the cigarette paper company Tabu.

He also made posters for Mayer cosmetics and the Wasserkraft-Elektrizitäts-Gesellschaft [Waterpower and Electricity Company]. Together with students and followers, he created a new artistic language which worked stronger than before with pure lines and reduced the colors mostly to red, blue, and black. With his programmatic volume “Poster Art in Vienna”, Klinger introduced himself and his colleagues to the American market. In 1928, he finally traveled to the country of his yearning. Following an invitation by General Motors, he stayed in the US from December 1928 to April 1929. Rather disappointed, he returned to Vienna.

On Wilhelm Deffke’s recommendation, whom he already knew from his years in Berlin, Klinger taught at the “Kunstgewerbe- und Handwerkerschule” in Magdeburg from March 1930 to September 1931. In connection with his studies of Deffke, Burkhard Sülzen found a biography of Klinger, written and submitted with his application for a permanent position in Magdeburg.4

Unfortunately, the Art Library in Berlin owns only seven of the poster works from the Vienna years.

The sad circumstances surrounding Klinger’s death (already mentioned in a book by Bernhard Denscher) were confirmed by the Vienna Document-Archive of the Austrian Resistance. He and his wife Emilie, whom he married in 1917, were deported to Minsk (on June 2, 1942) and killed. 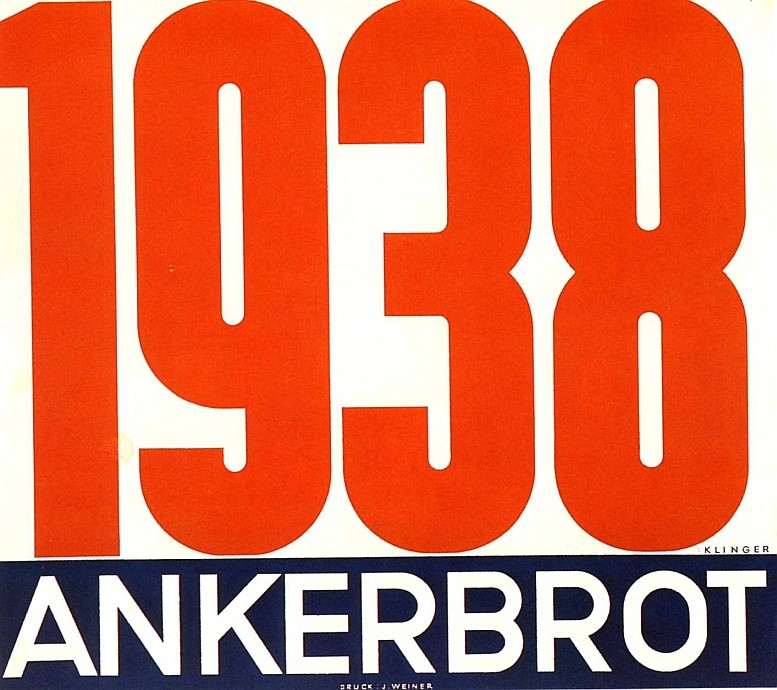