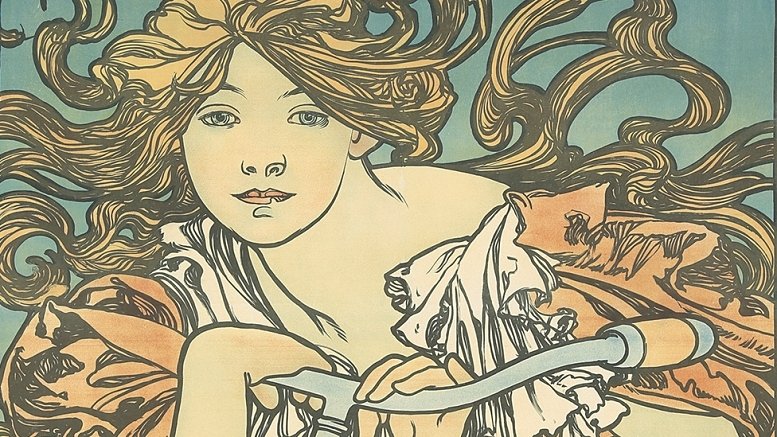 Three English friends go on a bicycle tour across Germany in the 1890s and have a number of experiences together, all of which are amusing. That – in a nutshell – is the content of the novel “Three Men on the Bummel” by the British author Jerome K. Jerome, published in 1900. The work is a sequel to Jerome’s novel “Three Men in a Boat” that was published eleven years earlier, in 1889. Although it was not as successful as its predecessor, which was translated into many languages and was reprinted many times, a US edition was published a year after its British counterpart. This US publication was titled “Three Men on Wheels” – perhaps to avoid confusing readers by including the German word “Bummel” used by Jerome, which means a leisurely outing, or stroll.

The three men travel around on a normal bicycle and a tandem. Every now and then there are discussions about the quality of the vehicles. When one of the narrator’s two friends uses the narrator’s bicycle – it is the normal bicycle, he protests: “Well, it doesn’t come up to the poster!” This is followed by a remarkable and thoroughly readable passage about poster advertising:

“What poster?” asked Harris. “The poster advertising this particular brand of cycle,” explained George. “I was looking at one on a hoarding in Sloane Street only a day or two before we started. A man was riding this make of machine, a man with a banner in his hand: he wasnʼt doing any work, that was clear as daylight; he was just sitting on the thing and drinking in the air. The cycle was going of its own accord, and going well. This thing of yours leaves all the work to me. It is a lazy brute of a machine; if you donʼt shove, it simply does nothing. I should complain about it, if I were you.” 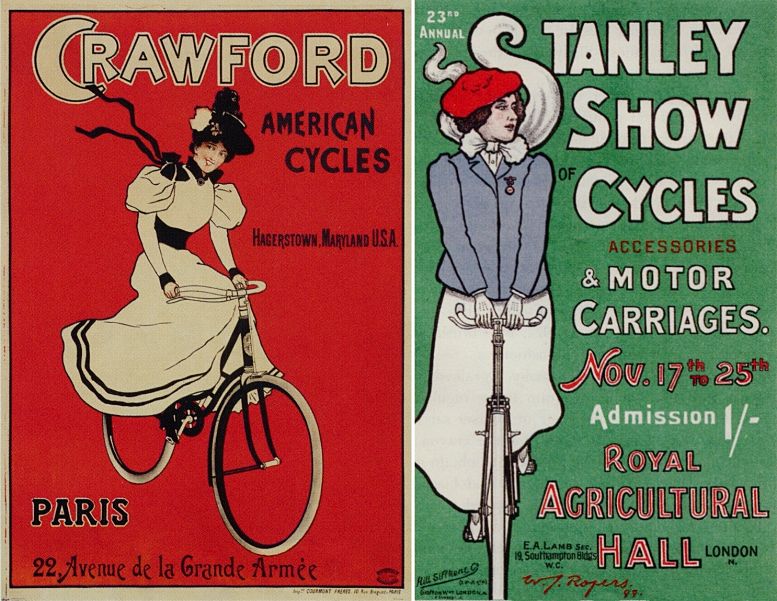 When one comes to think of it, few bicycles do realise the poster. On only one poster that I can recollect have I seen the rider represented as doing any work. But then this man was being pursued by a bull. In ordinary cases the object of the artist is to convince the hesitating neophyte that the sport of bicycling consists in sitting on a luxurious saddle, and being moved rapidly in the direction you wish to go by unseen heavenly powers. 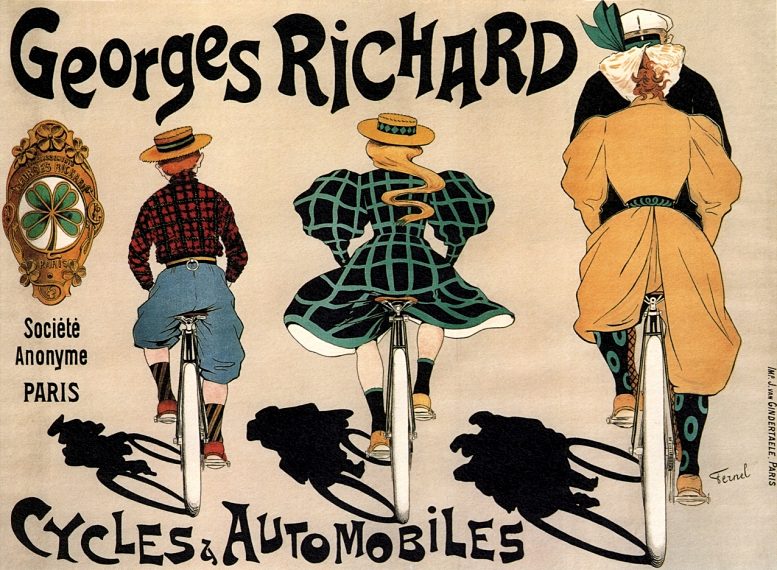 Generally speaking, the rider is a lady, and then one feels that, for perfect bodily rest combined with entire freedom from mental anxiety, slumber upon a water-bed cannot compare with bicycle-riding upon a hilly road. No fairy travelling on a summer cloud could take things more easily than does the bicycle girl, according to the poster. Her costume for cycling in hot weather is ideal. Old-fashioned landladies might refuse her lunch, it is true; and a narrowminded police force might desire to secure her, and wrap her in a rug preliminary to summonsing her. But such she heeds not. Uphill and downhill, through traffic that might tax the ingenuity of a cat, over road surfaces calculated to break the average steam roller she passes, a vision of idle loveliness; her fair hair streaming to the wind, her sylph-like form poised airily, one foot upon the saddle, the other resting lightly upon the lamp. Sometimes she condescends to sit down on the saddle; then she puts her feet on the rests, lights a cigarette, and waves above her head a Chinese lantern. 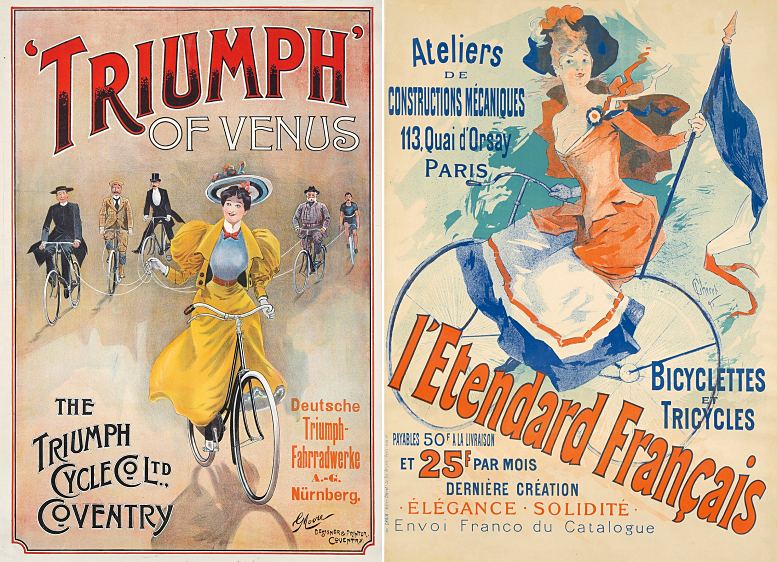 Less often, it is a mere male thing that rides the machine. He is not so accomplished an acrobat as is the lady; but simple tricks, such as standing on the saddle and waving flags, drinking beer or beef-tea while riding, he can and does perform. Something, one supposes, he must do to occupy his mind: sitting still hour after hour on this machine, having no work to do, nothing to think about, must pall upon any man of active temperament. Thus it is that we see him rising on his pedals as he nears the top of some high hill to apostrophise the sun, or address poetry to the surrounding scenery. 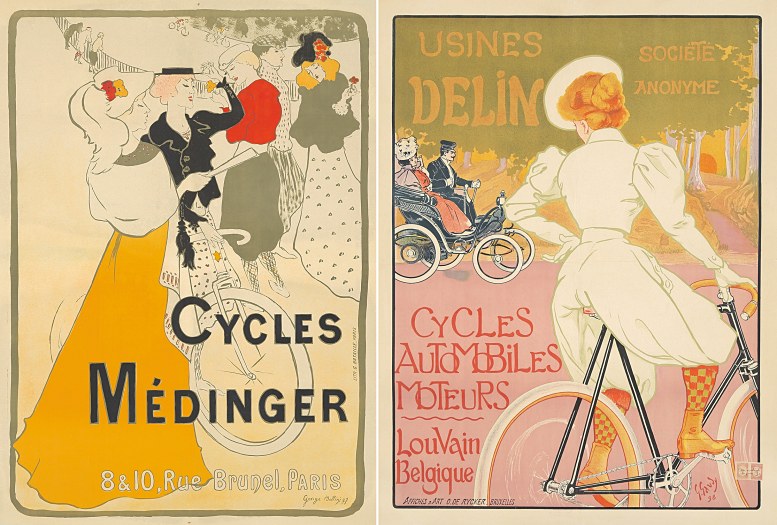 Occasionally the poster pictures a pair of cyclists; and then one grasps the fact how much superior for purposes of flirtation is the modern bicycle to the old-fashioned parlour or the played-out garden gate. He and she mount their bicycles, being careful, of course, that such are of the right make. After that they have nothing to think about but the old sweet tale. Down shady lanes, through busy towns on market days, merrily roll the wheels of the “Bermondsey Companyʼs Bottom Bracket Britainʼs Best” or of the “Camberwell Companyʼs Jointless Eureka”. They need no pedalling; they require no guiding. Give them their heads, and tell them what time you want to get home, and that is all they ask. While Edwin leans from his saddle to whisper the dear old nothings in Angelinaʼs ear, while Angelinaʼs face, to hide its blushes, is turned towards the horizon at the back, the magic bicycles pursue their even course. 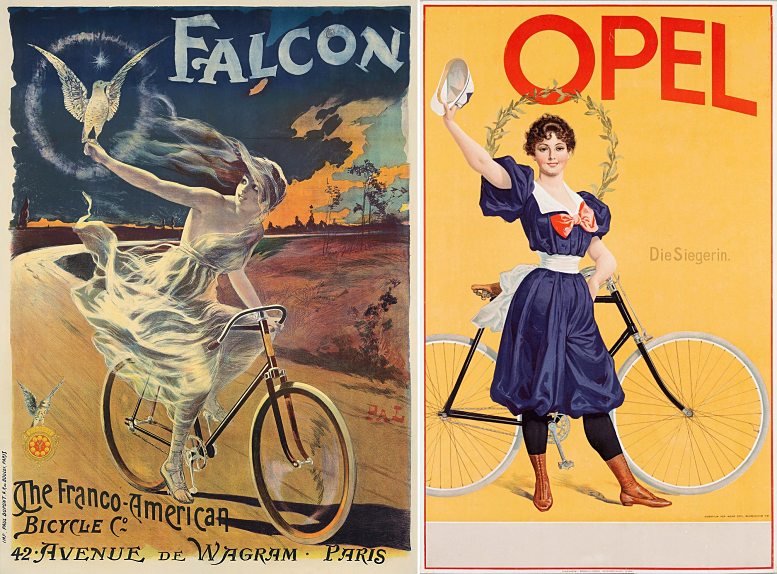 And the sun is always shining, and the roads are always dry. No stern parent rides behind, no interfering aunt beside, no demon small boy brother is peeping round the corner, there never comes a skid. Ah me! Why were there no “Britainʼs Best” nor “Camberwell Eurekas” to be hired when we were young?

Or maybe the “Britainʼs Best” or the “Camberwell Eureka” stands leaning against a gate; maybe it is tired. It has worked hard all the afternoon, carrying these young people. Mercifully minded, they have dismounted, to give the machine a rest. They sit upon the grass beneath the shade of graceful boughs; it is long and dry grass. A stream flows by their feet. All is rest and peace.

That is ever the idea the cycle poster artist sets himself to convey – rest and peace. 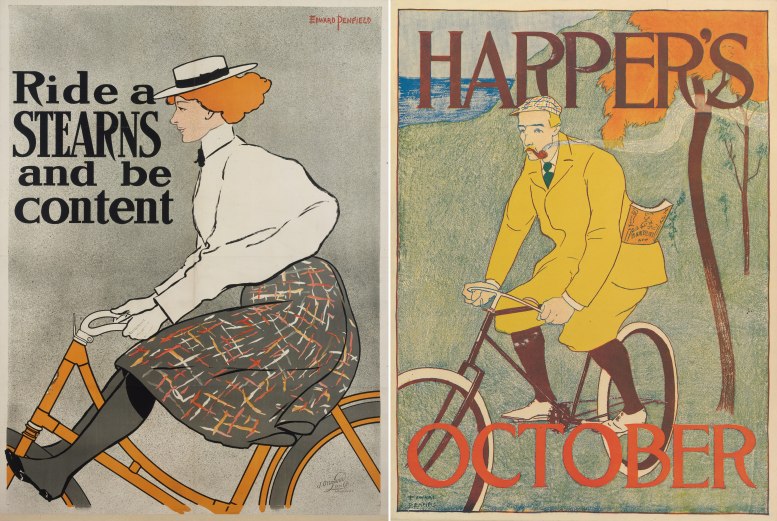 But I am wrong in saying that no cyclist, according to the poster, ever works. Now I come to reflect, I have seen posters representing gentlemen on cycles working very hard – over-working themselves, one might almost say. They are thin and haggard with the toil, the perspiration stands upon their brow in beads; you feel that if there is another hill beyond the poster they must either get off or die. But this is the result of their own folly. This happens because they will persist in riding a machine of an inferior make. Were they riding a “Putney Popular” or “Battersea Bounder”, such as the sensible young man in the centre of the poster rides, then all this unnecessary labour would be saved to them. Then all required of them would be, as in gratitude bound, to look happy; perhaps, occasionally to back-pedal a little when the machine in its youthful buoyancy loses its head for a moment and dashes on too swiftly.

You tired young men, sitting dejectedly on milestones, too spent to heed the steady rain that soaks you through; you weary maidens, with the straight, damp hair, anxious about the time, longing to swear, not knowing how; you stout bald men, vanishing visibly as you pant and grunt along the endless road; you purple, dejected matrons, plying with pain the slow unwilling wheel; why did you not see to it that you bought a “Britainʼs Best” or a “Camberwell Eureka”? Why are these bicycles of inferior make so prevalent throughout the land?

Or is it with bicycling as with all other things: does Life at no point realise the Poster?