Born in Prague on December 15, 1844, Moritz Perles founded his bookshop in 1868 after his application for a concession as a bookseller had been repeatedly turned down on the grounds that there were already too many such merchants in Vienna. On March 15, 1869, his “book and art shop” was officially opened in the inner city, Steindlgasse 2.[1] After further relocations and due to the thriving business Perles sought bigger premises and moved in 1889 to another building in the inner city, Seilergasse 4, where the company was located until 1938. During the years 1910–1912 the bookshops in downtown Vienna (e.g. Wilhelm Frick[2], Manz, Halm and Goldmann et al) were very active renovating and modernizing their premises, and Moritz Perles was one of them. As the files of the “Baupolizei” (the city planning and building department) in Vienna (file number E.Z. 1154), known as the MA 37, reveal, construction work was carried out on the ground floor, the mezzanine and the 1st floor in the Seilergasse. Further renovation followed in the years toward the middle of the 1920s when offices were enlarged and a special “niche” (Fig. 1) was created, as well as a “showroom” (Fig. 2).

For the conversion, the company Perles hired the prestigious and much sought after Viennese architect Prof. Ernst Lichtblau (1883–1963), who was also a teacher at the k.k. Staatsgewerbeschule. The main contractor was Anton Steyringer in Vienna. The plan is dated on 30 May, 1924, and therefore previous assumption that the store was remodelled in “1930” must be corrected.[3] The next stage of development and reorganization, this time the big showcase – also designed by Ernst Lichtblau – took place in 1926 (Fig. 3). 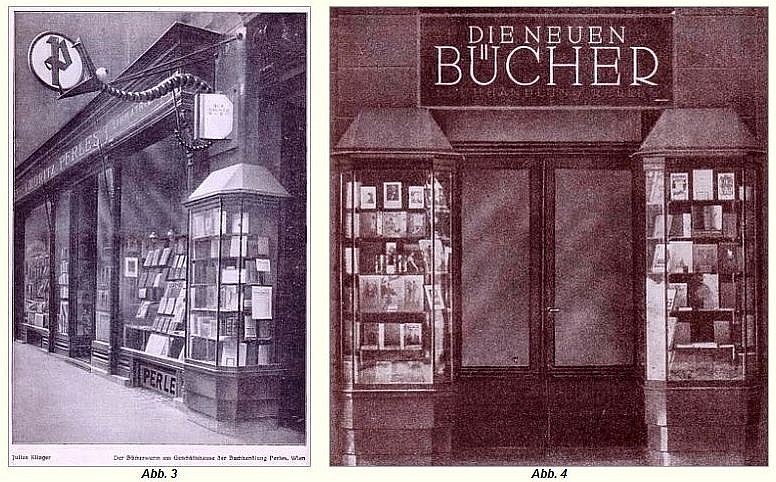 The “facelift” is likely to have contributed to the reputation of the Perles bookstore, given the fact that during the so-called “Austrian Week” from the 3rd to 11th of November, 1927, the “great showcase” of Ernst Lichtblau, where a selection of books by Austrian publishers were displayed, was given a special award.[4] Possibly because of the attention given to the new business premises and books shelves, Lichtblau was commissioned to design part of the interior of a centre on Waidhausenstraße. In a newspaper account, one could read the following: “It consists of a simply furbished auditorium and a space designed by architect Professor Ernst Lichtblau housing a small library with a still not great, but carefully selected number of books.”[5] The Perles bookstore in downtown Vienna, however, did not limit its advertising to the large window designed by Lichtblau on Seilergasse 4. There was also another one on Kärntnerstraße 43, not far from the book and art shop of Richard Lányi on Kärntnerstraße 44 (Fig. 4). The book showcase displayed a cross-section of the most recent literature.

Cooperation between the Perles company and the master of poster art Julius Klinger (1876–1942) must have begun around 1923 at the latest. The fact that Klinger – besides working for several Viennese publishers such as E. P. Tal, Rob-Verlag (including the satirical weekly “Die Muskete”) and Gerlach & Wiedling – made graphic designs for Perles[6] is – not least because of the distinctive “bookworm” – well known, but the fact that he created so many different works in the period up until 1932 has been unknown up till now. Most of Klinger’s work was for Perles’ quarterly publication “Wiener Literarische Signale”, which appeared from the spring of 1924 and up to the “Winter Issue 1937”. Customers received the brochures free of charge upon request.

The “Wiener Literarische Signale” were preceded by another Perles magazine, namely the “Literarischer Almanach” for 1920, the first issue of which appeared at Christmas 1919, coinciding with the company’s 50th anniversary. The cover, designed by Ernst Deutsch-Dryden (1887-1938) depicts a bespectacled older reader in a wing chair. The cover of the second edition (“Literarischer Almanach für das Jahr 1921”) was also designed by Dryden and shows a male reader with a monocle and cane reading a book. On the back of the 34-page brochure (Fig. 5) is a Perles-company logo with a stylized “P”, which was also drawn by Dryden and also appeared on the back cover of the issue for 1922. It was the last known work Dryden did for the Perles company (Fig. 6). 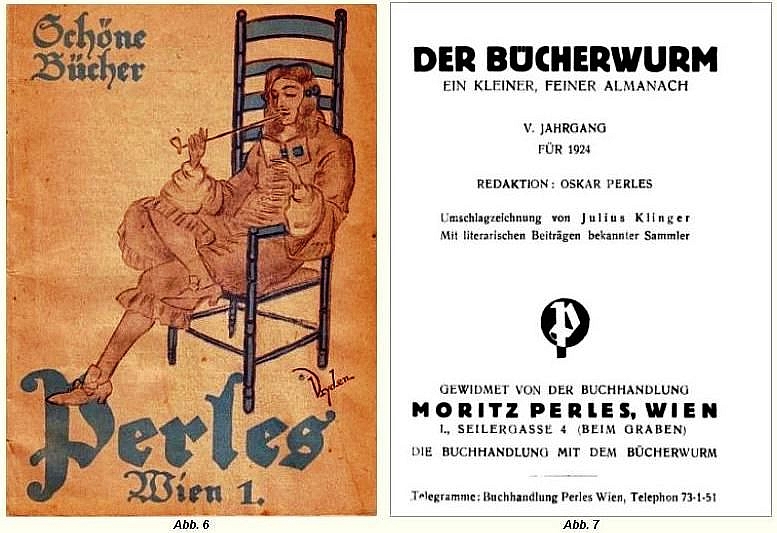 The in-house magazine, however, was continued, but with a name corresponding to the original trademark of the Perles company, namely the “Bookworm” with the famous “P” in its mouth, and Julius Klinger went on to create other advertising sujets for the Perles company. For this unique edition of the bookworm, Perles published a small almanac with literary contributions from well-known collectors (Fig. 7). Klinger designed the bookworm, usually depicted in black and white (Fig. 8) but also using the colours red and black. On the back cover is a variation of the “P” logo in a reddish-orange colour with the suffix Perles “bookstore” (Fig. 9). 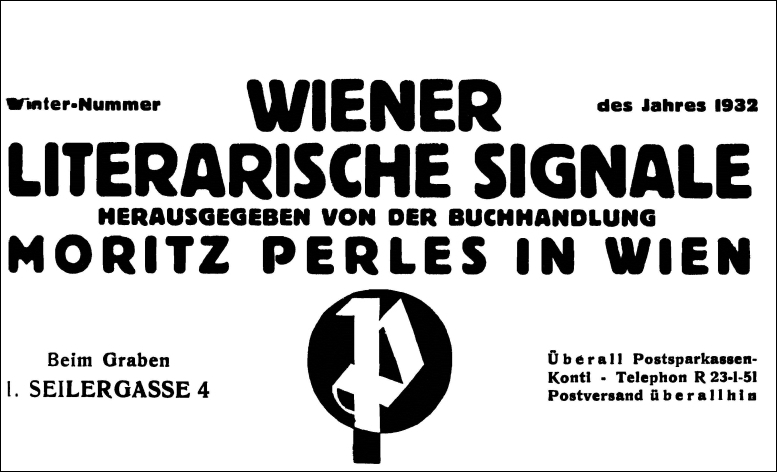 The purpose of the “Wiener Literarische Signale” (Fig. 10) was to promote Austrian writers and advertise the production of Austrian publishers. In addition to reports and book advertisements from foreign publishers, the magazine regularly published texts written by contemporary authors on their latest publications. They included, among others, Raoul Auernheimer, Hugo Bettauer, Max Brod, Egmont Colerus, Egon Friedell, Franz Karl Ginzkey, Paula Grogger, Enrica Handel-Mazzetti, Mirko Jelusich, Ernst Lothar, Heinrich Mann, Klaus Mann, Alfred Polgar, Felix Salten, Hanns Sassmann, Frank Thiess, Karl Tschuppik and Stefan Zweig. The special Christmas issue up to and including 1932 normally featured a colour drawing by Julius Klinger. Apparently – and because of the confusing similarity of addresses and street names in the inner city, the bookstore was still having difficulty in 1932 directing potential customers to the “right” address. At least that is the impression one gets from the cover of the Winter Issue 1932 of the “Wiener Literarische Signale” designed by Julius Klinger. Klinger came up with a simplified route plan (see Fig. 11). On the inside pages, there is the following note to readers: “Where is the Perles’ bookstore? Since 1889, in its own premises in Seilergasse 4. Not Seilerstätte, not Spiegelgasse, where people often look for it, but on Seilergasse between Graben and Neuer Markt. In his graphic design on the front cover, Professor Julius Klinger has depicted the location in the simplest manner possible.” 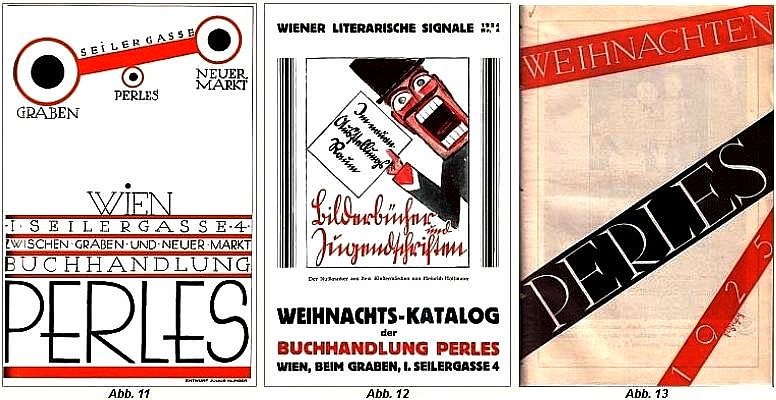 In the period 1924–1932, Klinger designed eight covers, six of which make a reference to Christmas. It began in 1924 with the Nos. 4 and advertising for the “Christmas catalogue” and a specific reference to “picture books and early writings” (Fig. 12). For Christmas 1925 Klinger created a simple cover with red and black stripes (Fig. 13). 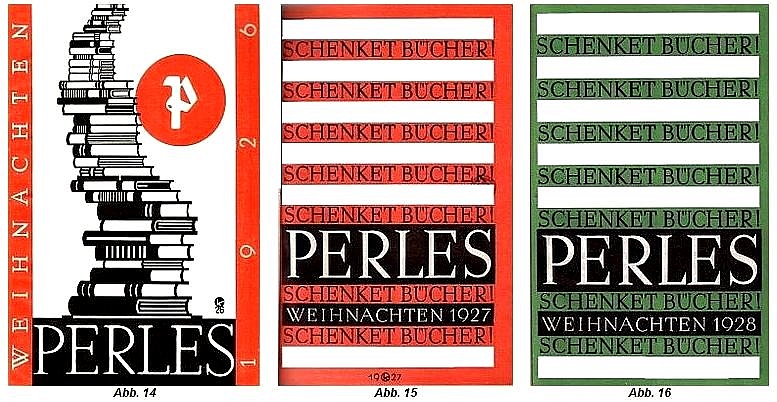 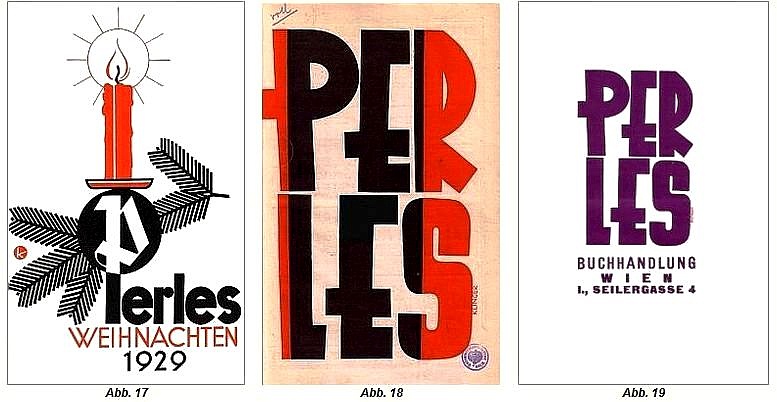 On the cover for 1929 there is once again a genuine Christmas motif – a burning Christmas candle with Klinger’s distinctive “P” at the beginning of the name Perles (Fig. 17). For the 1930 cover Klinger chose a very simple motif: he split the name Perles into “PER” and “LES” alternately in red and black (Fig. 18). The following year, Klinger chose an equally simple motif this time using the colour violet and split the name “PER” and “LES” (Fig. 19) on white background. The aforementioned Winter Issue 1932 was the final one for which Klinger designed the cover of the “Wiener Literarische Signale”. But that was not the only work he did for the Perles company. The Moritz Perles company operated a kind of book mail order system, that is the bookstore was willing to procure every domestic and foreign book requested and send it to the customer by mail.

There was also a separate ad with a drawing of “winged” books (Fig. 20). Klinger’s motif with the winged books was also used in a relatively small ad (Fig. 21). The postcard with which a person could order books from Perles made use of Klinger’s winged book motif (Fig. 22) as well. 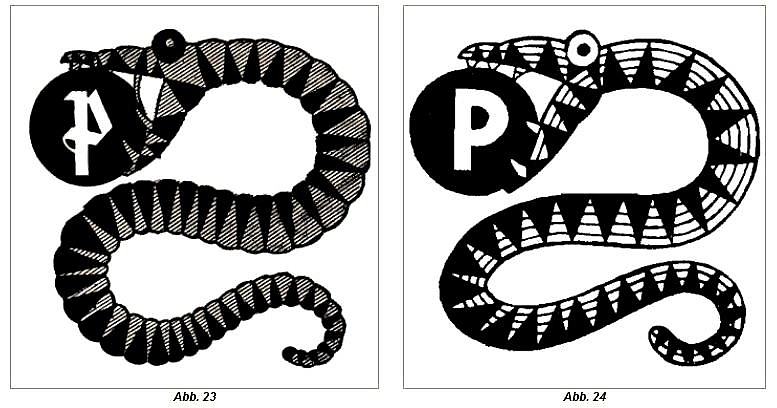 His stylized “P” logo continued to be used in the “Wiener Literarische Signale” (and elsewhere), but for unknown reasons and beginning with the Winter Issue 1932 it was absent and had been replaced by a normal font (Fig. 23; Fig. 24). One of the last works Julius Klinger did for Verlagsbuchhandlung Moritz Perles – if not the last – is a drawing for an ad likely printed in December 1932, for what was dubbed as Austria’s largest publisher of calendars, i.e. Perles (Fig. 25). 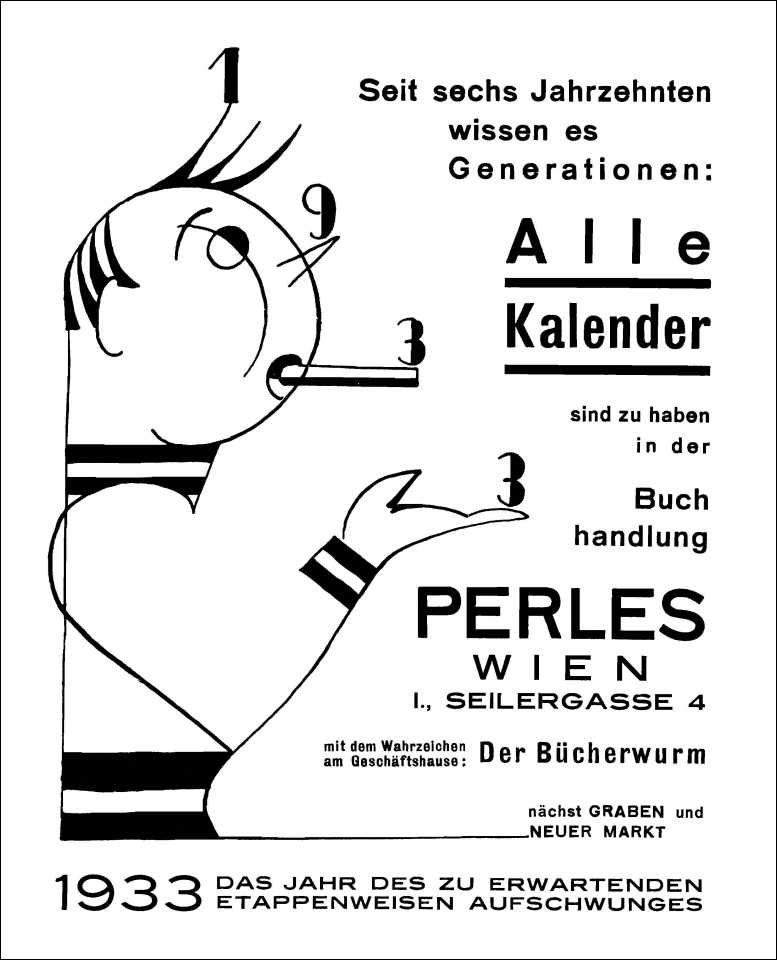 For nine years Klinger’s drawings and his bookworm were the public face as it were of one of the most famous and successful Viennese bookstores up until 1938. Unfortunately, the Perles logo on Seilergasse 4 has long since disappeared. All that reminds us today of the store’s existence is a plaque unveiled in 1988 in honour of the Perles company and other Viennese booksellers and publishers who lost their livelihoods and their lives after the annexation of Austria in March 1938.