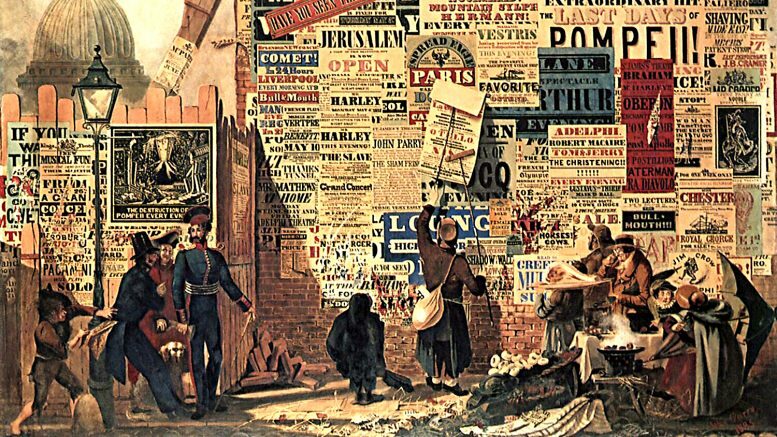 “I’m Sammy Slap, the bill-sticker, and you must all agree sirs, / I sticks to business like a trump, and business sticks to me sirs” – these are the opening two lines of the broadside ballad “Sammy Slap the Bill Sticker”. Published for the first time around 1838 as a broadsheet[1], the text and also the illustration by John Orlando Parry reveal the stage of development in advertising across England’s cities by the early 19th century. In the text, a bill sticker introduces himself and his trade that was still relatively new at the time. Nevertheless, it had already become sufficiently established for problems to become apparent, and he points out the circumstance that certain bill stickers were only hanging up half of their posters despite receiving a full wage. The ballad also divulges the sources of most jobs in poster advertising at the time, namely the theatre and events. Stars from the early days of theatre in London who are mentioned here are William Charles Macready (1793–1873), Laura Honey (1816–1843), Ellen Tree (1805–1880), Helena Faucit (1817–1898), Lucia Elizabeth Vestris (1797–1856) and Robert Keeley (1793–1869).

As Helena Faucit only made her Royal Opera House debut in 1836 and Ellen Tree married in 1842 and took the name Kean, it is highly likely that the text must have been written during this time, i.e. between 1836 and 1842.

The versions of the ballad that were published in the USA in the 2nd half of the 19th century[2] have fewer verses and contain the names of different actors and actresses. For instance, the text includes the famous Swedish singer Jenny Lind, who had created a whirlwind in the USA with her tour from 1850 to 1852.

Round Nelson’s staty, Charing Cross, when any thing’s the go sirs
You’ll always find me at my post a sticking up the posters;
I’ve hung Macready twelve feet high, & though it may seem funny
Day after day, against the walls I’ve plaster’d Mrs. Honey.
Vith my paste, &c.

Now often in the vay of trade, and I don’t care a farden,
Arter I have been well paid to hang for Covent Garden,
Old Drury Lane has call’d me in, with jealousy to cover ’em,
And sent me round vith their bills to go and plaster over ’em,
Vith my paste, &c.

In search of houses old and new, I’m always on the caper,
And werry kindly gives ’em all a coat or two of paper,
I think I’ve kivered all the valls round London though I preach it,
And if they’d lot me kiver St. Pauls, so help me bob I’d reach it.
Vith my paste, &c.

I’m not like some in our trade they desarve their jackets laced sirs,
They stick up half the master’s bills, & sells the rest for vaste sirs,
Now honesty’s the best policy, vith a good name to retire vith,
So vot I doesn’t use myself the old gal lights the fire with.
Vith my paste, &c.

I’m proud to say there’s Ellen Tree, the stage’s great adorner,
I’ve had the honour of posting her in every hole and corner,
And Helen Faucit, bless her eyes, ve use her pretty freely,
And plaster Madam Westris bang atop of Mr. Keeley.
Vith my paste, &c.

Sometimes I’m jobbing for the Church vith charitable sermons,
And sometimes for the Theatres the English and the Germans,
To me of course, no odds it is, as long as I’m a vinner,
Vether I vork for a saint, or hang up for a sinner.
Vith my paste, &c.

The paste I use I make myself, and I’ll stick to this however,
That vhen my bills I’ve put up, they’ll stand both vind & veather;
I comes the fancy work, although there up, mind in a twinkle,
I never tucks the corners in, nor leaves a blessed wrinkle.
Vith my paste, &c.

Then surely you will all allow I am a man of taste, sirs,
I arn’t a pastry cook, although I deals puffs and paste, sirs;
Vhenever you may have a job, to show how I desarve you,
About the town thro’ thick and thin I’ll brush along to sarve you.
Vith my paste, &c.

Thanks to Rosemary Bridger-Lippe, who translated this introduction, for sharing knowledge of the ballad “The Bill Sticker”.