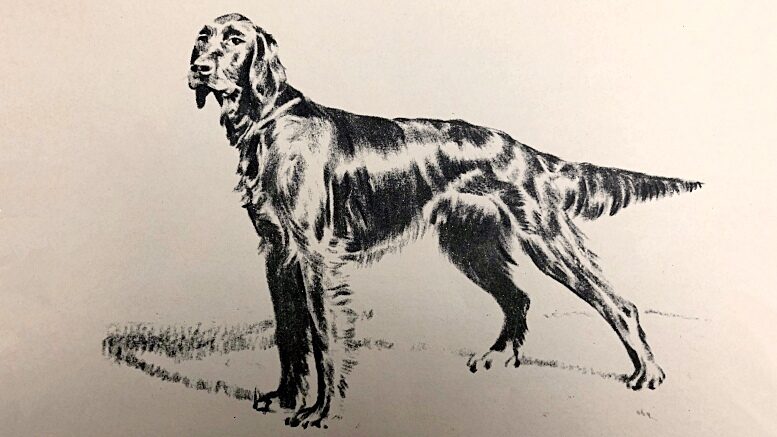 Between 1919 and 1938 Hans Neumann ran one of the most important Austrian graphic studios, with which he also achieved considerable international recognition.[1] In addition to commissions from Germany, his work was also published in British specialist publications such as “Posters & Their Designers”[2] and “Poster & Publicity”[3]. As a Jew Neumann had to leave his homeland after the “Anschluss” of Austria to Nazi Germany. At the end of 1938, he managed to flee to Australia via England[4], from where he only returned to Austria in 1957. Very little is known about these more than 18 years of exile. Even in the profound exhibition catalogue “Hans Neumann. Pioneer of Advertising Agencies” published by the Viennese “Museum für angewandte Kunst” in 2009 it is stated: “Information about Neumann during his time in Australia is extremely sparse”[5].

Recent research, however, has made it possible to find out quite a bit about Hans Neumann’s life in Australia. The first noteworthy report about him, who usually called himself Newman in his new homeland, dates from 1941 and can be found in “The Sydney Jewish News”. Under the title “Prize Winning Refugees” it says: “Shortly after it became known here that Joseph Binder, a Viennese Jewish artist had won the first prize in the poster contest for the US. Army in which 610 artists of America had taken part, another Viennese Jewish artist, Hans Newman (Neumann) won in partnership with the photographer Russel Roberts the first prize for the best Australian recruiting poster. The competitive works were exhibited at David Jones’ in Sydney, are presently on view in Melbourne and will be shown in other Australian centres. Mr. Hans Newman is a member of the Committee arranging an Exhibition of European Paintings, Furniture and Objects of Art for May, 1942, in Sydney.”[6] Apart from the fact that Joseph Binder was not Jewish, the report shows how quickly Hans Neumann was able to achieve recognition in Australia both as a designer and as an organiser of cultural events.

The poster competition was a campaign of the Sydney-based “Sunday Telegraph”, with further newspaper reports naming only the photographer Russel Roberts and not Neumann as the prize winner.[7] The poster itself has not yet been found. However, there is also no indication that it was actually printed. But there are some descriptions of the design in Australian newspapers. These indicate that the sheet shows a photograph of a soldier in battle dress holding a rifle in one hand and pointing to the words “We want you!” with the other.[8]

In 1943, the illustrated magazine “Pix”, published in Sydney, had a double page on the subject “AUSTRALIAN SOLDIER ARTISTS PUT THEIR WAR IMPRESSIONS ON CANVAS”. Hans Neumann was prominently represented with his work “Alarm”: “Accurate Technique And An Almost Photographic Realism are main features of this striking pencil drawing by L/Cpl. Hans Newman, N318921, Member of Friendly Aliens’ Labor Corps, Newman hails from Vienna, has been in Australia about five years. His commercial art studio in Europe was famous”[9]. In addition to the appreciation of Neumann’s artistic quality, the newspaper report also documents that Neumann was a member of the Australian Army with the rank of “Lance Corporal”. 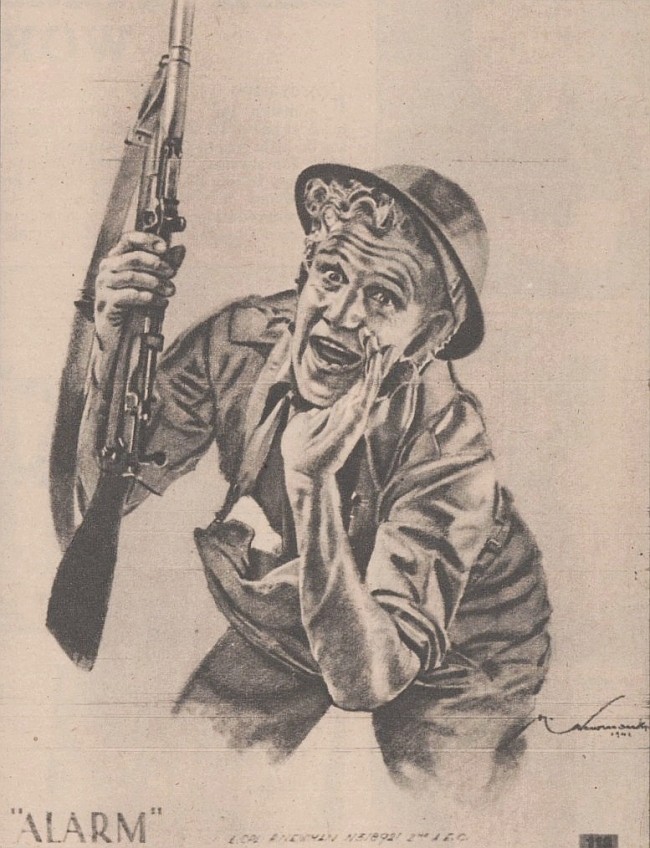 One and a half years later, Hans Newman was again mentioned in “The Sydney Jewish News” in a function that he had already enjoyed very much in Vienna. He was responsible for the artistic programme of a festival, in this case for the Jewish youth organisation “Youth Aliyah”. The motto of the event was “A Midsummer Night’s Dream”. The plans were enthusiastically announced: “Two committees are working untiringly to make this function the event of this season. An artistic programme under the direction of Hans Newman promises great and exciting things. We are not going to let the cat out of the bag, but we’ll tell you that Dance Music, an Open Air Cafe, and a Floodlit Ballet are only a small part of the attractions that aw[a]it you.”[10]

As the newspaper report shows, Neumann was apparently actively involved in the Sydney Jewish community. For example, a Hans Newman is also mentioned rendering outstanding services as a committee member for the “Parramatta Synagogue” in Sydney, which was completed in 1955.[11] It can be assumed that this Newman is the Viennese Hans Neumann.

In October 1947, an exhibition was held in Vienna to mark the 20th anniversary of the founding of the “Bund österreichischer Gebrauchsgraphiker”. In the catalogue published for the exhibition, Hans Neumann was listed as deceased.[12] In connection with this impious false report, the following search notice in “The Sydney Jewish News” of January 1948 may perhaps be related: “Hans Neumann from Vienna, who was a painter there”[13]. 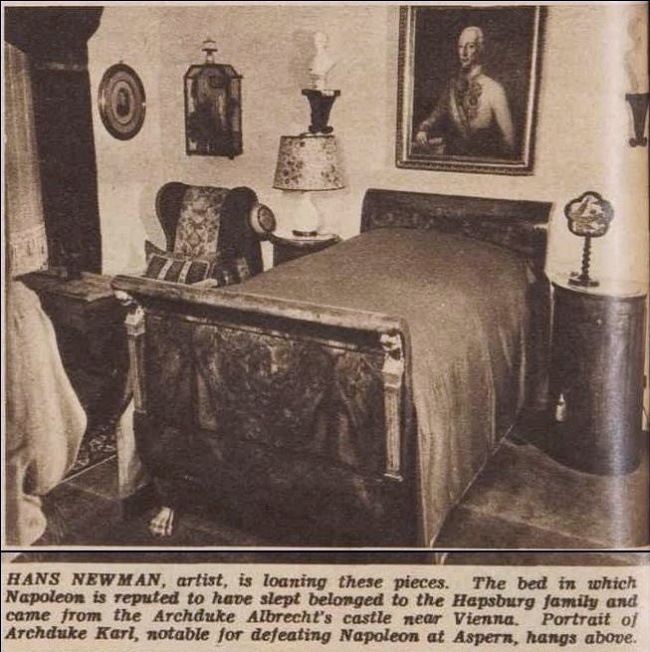 In a somewhat curious context Hans Neumann was mentioned two years later, namely as the lender of a bed from the estate of Archduke Albrecht, in which Napoleon is said to have slept. This was an exhibit for the “International Art Treasures Exhibition” held in Sydney in 1949: “HANS NEWMAN, artist, is loaning these pieces. The bed in which Napoleon is reputed to have slept belonged to the Hapsburg family and came from the Archduke Albrecht’s castle near Vienna. Portrait of Archduke Karl, notable for defeating Napoleon at Aspern, hangs above.”[14]

A year later, under “Book News” in the “Sydney Morning Herald”, the new publication “EVERYBODY’S DOG BOOK. A booklet written and illustrated by Hans Newman” was announced.[15] In the twenty-page illustrated booklet the most popular dog breeds are presented in words and pictures, whereby the author was able to incorporate his extensive knowledge in this field. Thus he was presented in the book as a capacity on dog matters: “Hans Newman is well known and respected by all dog lovers. He is an Authority, a Judge and Breeder. He can also draw dogs, as you can see as you turn the pages of this book.”[16] Although the booklet was published by the “Children’s Press” in Sydney, it bears the note “this is a book for the entire family” on the cover. 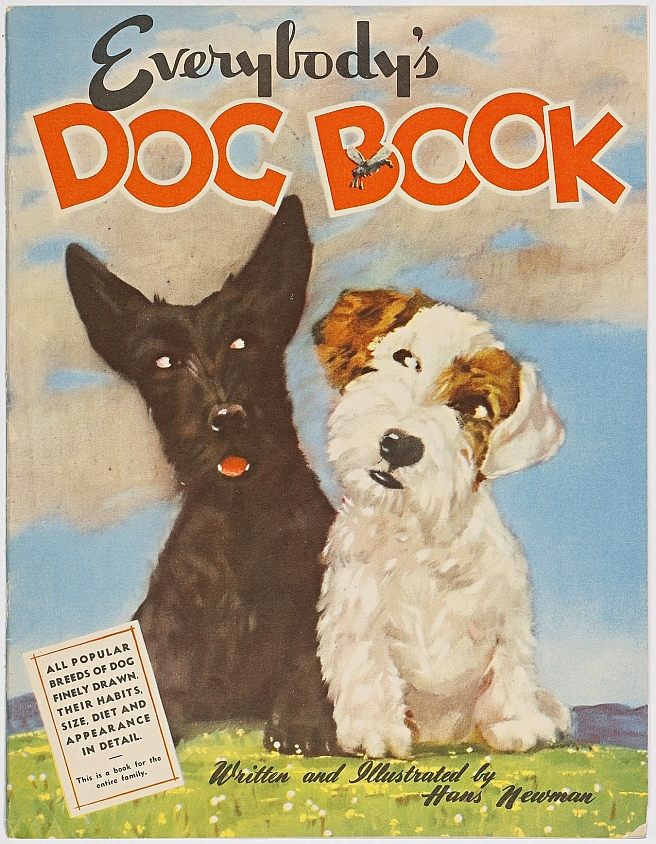 From 1 April 1957 Hans Neumann was again registered in Vienna, although Sydney was still listed as his main place of residence on his registration form.[17] He subsequently worked in Austria again as a commercial artist, mainly in the field of business advertising. On 19 November 1960, he died in the city of his birth, Vienna, which was never to become his permanent home.[18]