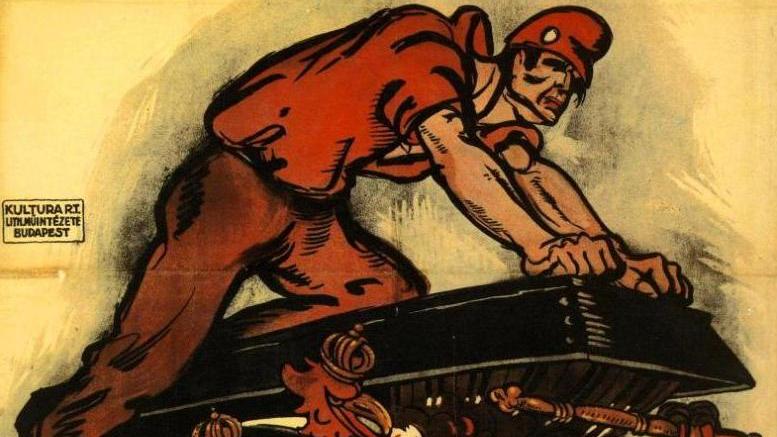 In a day and age where it has become rather difficult to distinguish election campaign posters from billboards advertising shampoo, toothpaste, hand lotion or various detergents, it´s always interesting to look back to the days when colourful posters did indeed transport ideology or a message in a less subtle manner. One of the foremost exponents of the pictorial political posters in the first half of the 20th century was the Hungarian-born artist Mihály Biró. 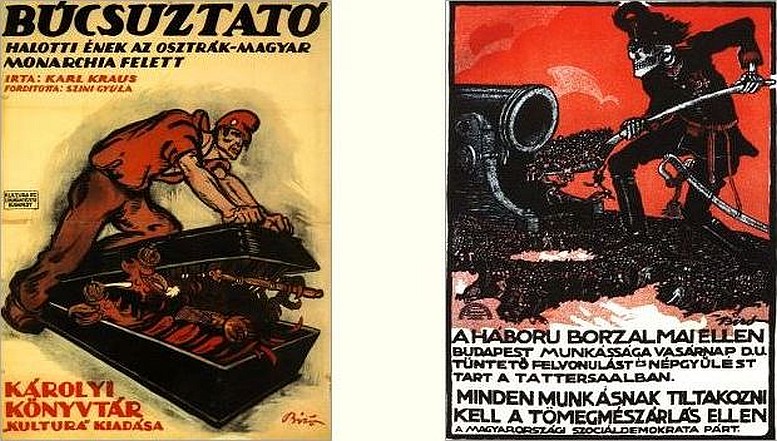 Biró´s life was eventful, but the adventure was seldom of the romantic variety. He was born on November 30th, 1886 in Budapest where he studied “small sculpture” and then applied graphic arts at the so-called “Kunstgewerbeschule”. In the fall of 1919 he was forced to pack his bags and flee for the first time. On this occasion it was the authoritarian Hórthy regime in Hungary which prompted him to go. Biró joined the growing colony of Hungarian artists and writers in Vienna after the war and stayed in the capital until 1928. Then he moved to Berlin to work for one of the major German motion picture companies. The world economic crisis brought him back to Vienna but only temporarily. During the brief civil war in Austria in February, 1934, Biró threw his political support behind the “losers”, that is the workers and the Social Democrats. He was forced to leave Austria and flee to nearby Czechoslovakia, where he would be safe from reprisals. The period of emigration there lasted only four years. After the occupation of the Sudetenland by Hitler´s army in the fall of 1938, he had to up and leave again – this time for Paris. Here he spent much of the war seriously ill in hospital. In 1943 he faced deportation to a concentration camp, but it was only because of his poor state of health that he was deemed unfit for transport. By the end of the war Biró was a 37 kilogram skeleton and it took about three years in hospital before he had recovered sufficiently to stand up to the long journey back to the homeland he had left about 30 years earlier. He arrived in Budapest in May, 1947, but continuing illness prevented him from really “enjoying”, as it were, the honours now being bestowed upon him. He died about a year and a half later.

Biró met with overwhelming success with the towering figure of the “red giant” which he had introduced earlier in Hungary. The Austrian Social Democrats called him to take charge of designing the election campaign propaganda for them. The “red giant”, the strong man, was one of the possibilities to symbolically depict the proletariat in its entirety. Biró repeatedly used the man with the hammer caught in a state of suspension as he is about to strike with all his might. A counter-motif is that of the anonymous suffering masses. Biró envisages the “capitalists” putting Austria´s post-war financial house in order at the expense of the working classes. One poster which drew criticism was the one depicting the questionable role played by the Austrian clergy. It shows two highranking churchmen, noses up in the air, riding in a carriage past a Christ figure who says “That´s not what I meant by Christianity”.

But Biró´s works were not, of course, all of a political nature. He did a considerable amount of commercial advertising designing posters for razors blades, hand soap, shoes, cigarette paper and so on and so on as well as for magazines and film companies. In the midst of all the “hidden persuasion” in today´s sophisticated advertising, a return to the beginnings is more than just refreshing…

Robert Haas: From “Officina Vindobonensis” to the “Ram Press”