Design for a decorative painting, in: Die Fläche, 1903

The extent to which Vienna’s School of Arts and Crafts (Wiener Kunstgewerbeschule) was ahead of the aesthetic perceptions of its time in the early 20th century remains astonishing. One notable example here is a series of posters for Vienna that was printed in “Die Fläche”, a graphic arts publication by several professors from the School of Arts and Crafts in 1903. The works by students at the School displayed a modern flair that pushed officials in the City of Vienna to the limits of their appreciation, and therefore resulted in a lack of contracts for such projects. Indeed, it would take decades before the necessity of targeted city marketing would be recognised.

The art student Emma Schlangenhausen contributed arguably the most ambitious and also most attractive design in the series. Her work in “Die Fläche” adopted a stencilled approach, shunning all conventional stereotypes of Vienna and simply showing a cross section of Vienna’s Ringstrasse with its primary and secondary roadways. The design style transforms the ostensive ordinariness of her chosen motifs into an attractive image of the city, particularly when the foliage of the trees merges to form an area of ornamental geometry. 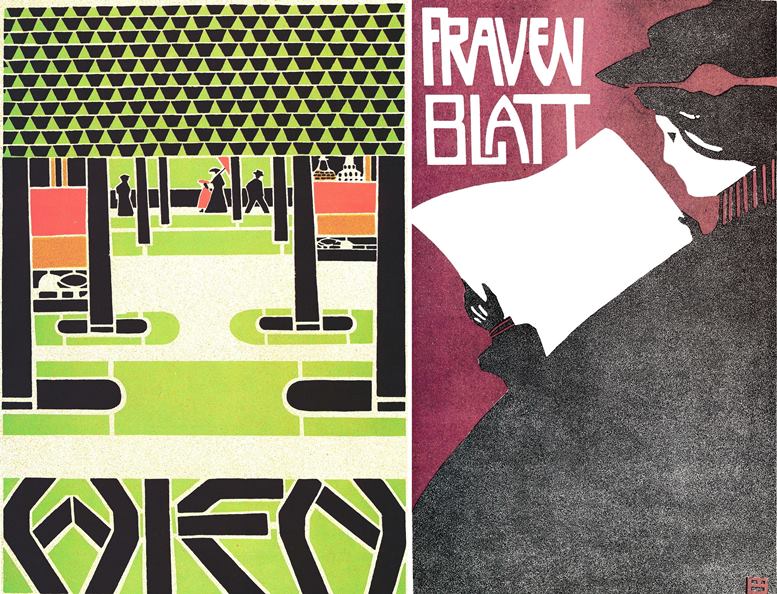 Emma Schlangenhausen, design for a stencilled poster and the front page of a women’s newspaper, both published in: Die Fläche, 1903

Other scintillating commercial graphic works produced by Schlangenhausen that were printed in “Die Fläche” include the front page of a women’s newspaper and designs for decorative painting and business cards. In 1903 she was also able to publish an original woodcut entitled “Yearning” in the Vienna Secession magazine “Ver Sacrum” – it was without doubt a major accolade for the young student.

Emma Schlangenhausen was born on 9 March 1882 in Hall, Tyrol. Her family moved to Graz shortly after her birth when her father, who worked as a psychiatrist in Hall, was appointed director of the “Styrian Lunatic Asylum”. Schlangenhausen studied with Alfred Roller and Kolo Moser at Vienna’s College of Arts and Crafts between 1900 and 1905. She was awarded a silver medal in 1904 at the world exposition in St. Louis, USA, and in 1908 she exhibited at the Vienna Art Show (Kunstschau).

Around 1910 she travelled to Switzerland with her friend Helene von Taussig to study with Cuno Amiet, from where they moved to Paris for further studies between 1911 and 1914. During the First World War Schlangenhausen was active in “military sanitary care”, as were many of her female colleagues. In 1919 she moved to Salzburg with Helene von Taussig, where her student friends Maria Cyrenius and Hilde Exner lived. 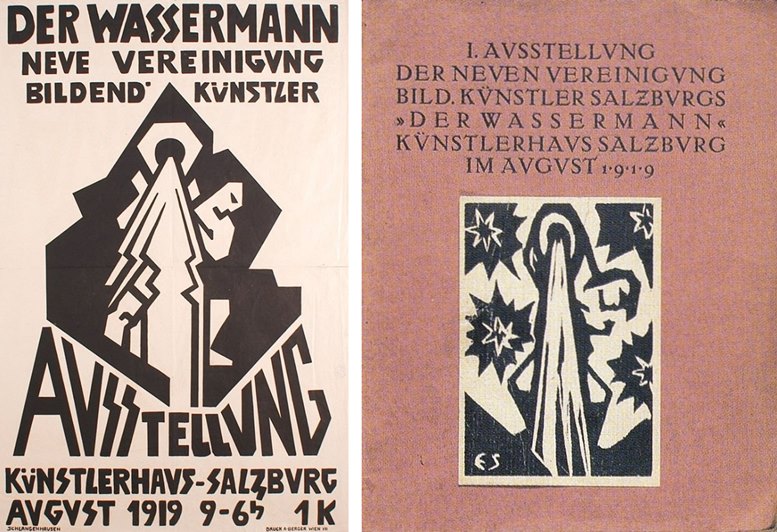 Poster and cover of the catalogue for the first exhibition of the art association “Der Wassermann”, 1919

Also in 1919 Emma Schlangenhausen joined the newly established art association “Der Wassermann”, for which she designed the poster and cover of the catalogue for the group’s first exhibition. She was also a member of “Wiener Frauenkunst”, an association of Viennese women artists. These societies enabled her to exhibit her work widely. From then on, she no longer worked in applied arts, but rather produced woodcuts with clean black/white contrasts, especially on religious themes. She also created several frescos for the Franciscan monastery in Salzburg which were destroyed during the Nazi era. During the Second World War Schlangenhausen was able to continue working as an artist and also took part in exhibitions. Helene von Taussig was dispossessed owing to her Jewish origin and was murdered in a concentration camp in 1942.

Emma Schlangenhausen died on 12 March 1947 in Großgmain, near Salzburg.

“One of the most original expositions”: The Vienna Poster Exhibition in 1888